The preparatory works for Kendia tunnel, one of the two tunnels along the Dapilon-Santou railway line in Guinea have been launched by the government of the West African country represented by Abdoulaye Magassouba, Minister of Mines and Geology of the Republic of Guinea.

According to the provisional timetable, the implementation of the 11.7 kilometers section is expected to take place within a span of approximately 34 months. 3 months for the preparatory work i.e. from 1st March to 31 May 2021, 30 months for the actual construction works from 1st June 2021 to 17 January 2024, and 15 days for receipt of the book from January 18 to February 2, 2024.

The construction works will begin at PK48 and end at PK160 for a maximum depth of 520m, following an elevation of the surface of the entrance track of 103, 23m, and a surface elevation of the exit lane of 138.09m.

The Kindia rail tunnel (the Madina-Oula single-tube double-track tunnel) will be the longest tunnel in Guinea and indeed in all of the West Africa region. The second tunnel, along the Dapilon-Santou railway line, with a total length of 8.95 km, will be built in the Ouré-Kaba sub-prefecture in the Mamou region.

During its early and near-future phases, the railway will be primarily tasked with the transport of mineral rocks (ore and bauxite) from the mining zone to Dapilon Harbor.

In the future, it is expected to be opened to serve third-parties and to be integrated into the Guinean national railway network to better serve the country’s socio-economic development. 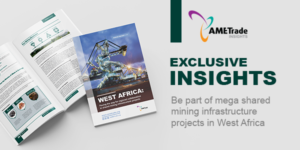